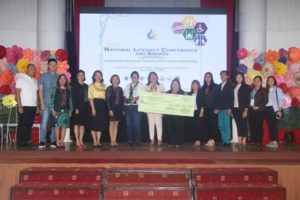 DAGUPAN CITY – The city of Dagupan received another national award after being adjudged as one of the most outstanding local government units (LGUs) under the independent component city category in the field of literacy.

This is the first time Dagupan City was recognized by the National Literacy Awards in the national level after having been adjudged as regional awardee for the second time since 2016.

In her speech, Dr. Emelyn Libunao of the Philippine Information Agency (PIA) gave recognition to the local government’s brand of unlimited service to its constituents when she presented  the award.

Dr. Libunao is also one of the Literacy Coordinating Council (LCC) validators who conducted an evaluation of the city’s literary programs during their visit in Dagupan sometime last August.

Mayor Belen T. Fernandez said that the award will serve as an inspiration for the local government to continue working and providing opportunities for Dagupenos through the city’s literacy programs.

Meanwhile, outstanding LGUs belonging from 4th to 6th and 1st to 3rd class municipalities as well as highly urbanized cities were also awarded during the event.